From Foster to Best Friend 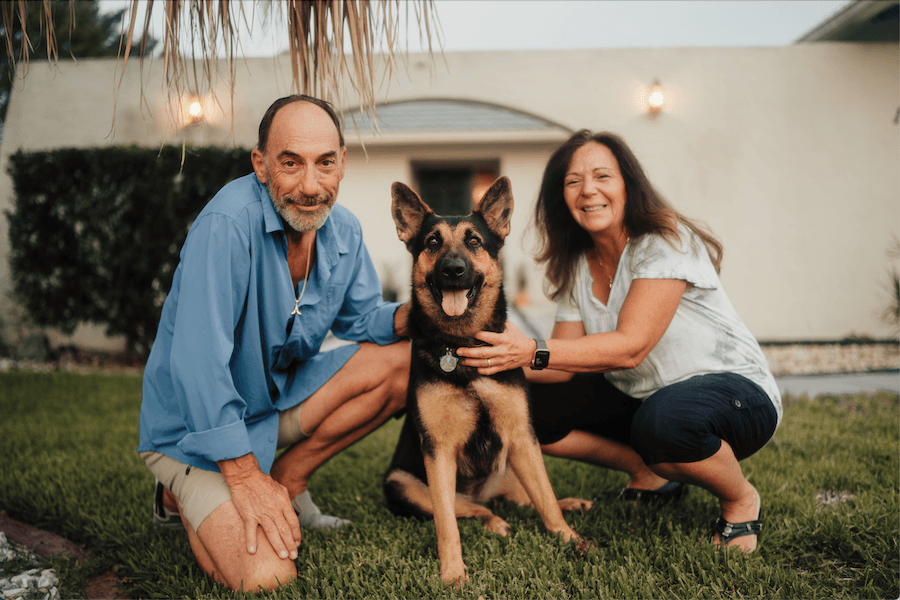 Christopher and Loretta Mattie catching a sunset walk outfront of their home with their newly-adopted German Shepherd pup Kona, found at HSSC. Photography by Wyatt Kostygan

The Humane Society of Sarasota County has been caring for and placing animals in their forever homes since 1952. Originally, they could only house six cats and 48 dogs but, since expanding and declaring themselves a no-kill shelter, they have as many as 250 animals onsite any given day. Caring community members often find and bring in underaged puppies or kittens who aren't able to be adopted until they've been spayed or neutered and are 12 weeks old (that's where the foster program comes in). "We want these animals in home environments where they can receive the care they need to become someone's new best friend," says Executive Director Anna Gonce. After 20 years in animal welfare, Gonce, like many of us, cannot say no to kittens (who are the most at risk in traditional animal service shelters). Since starting in October, she herself has fostered a dozen litters, all of which have found wonderful homes. "Pets serve an important role in our lives. They're a form of unconditional love, a best friend, a therapy animal, a playmate," she says. "When a person and an animal choose each other, that's when the magic happens." And The Humane Society wants to be a part of making it happen. The organization has built a new facility that will allow the team to care for 900 more animals each year (there is a grand opening later this month). "This new facility is a beautiful place for our animals, but it's not just that," she says. "It represents our renewed commitment to the animals of Sarasota."

THE HUMANE SOCIETY OF SARASOTA COUNTY, INC., IS A PRIVATE, NON-PROFIT 501(C)(3) CORPORATION REGISTERED WITH THE FLORIDA DEPARTMENT OF AGRICULTURE & CONSUMER SERVICES, REGISTRATION NUMBER CH239, AND RECEIVES 100% OF ALL DONATED FUNDS. A COPY OF THE OFFICIAL REGISTRATION AND FINANCIAL INFORMATION MAY BE OBTAINED FROM THE DIVISION OF CONSUMER SERVICES BY CALLING TOLL-FREE 1-800-435-7352 WITHIN THE STATE OR ONLINE AT WWW.FRESHFROMFLORIDA.COM. REGISTRATION DOES NOT IMPLY ENDORSEMENT, APPROVAL, OR RECOMMENDATION BY THE STATE.