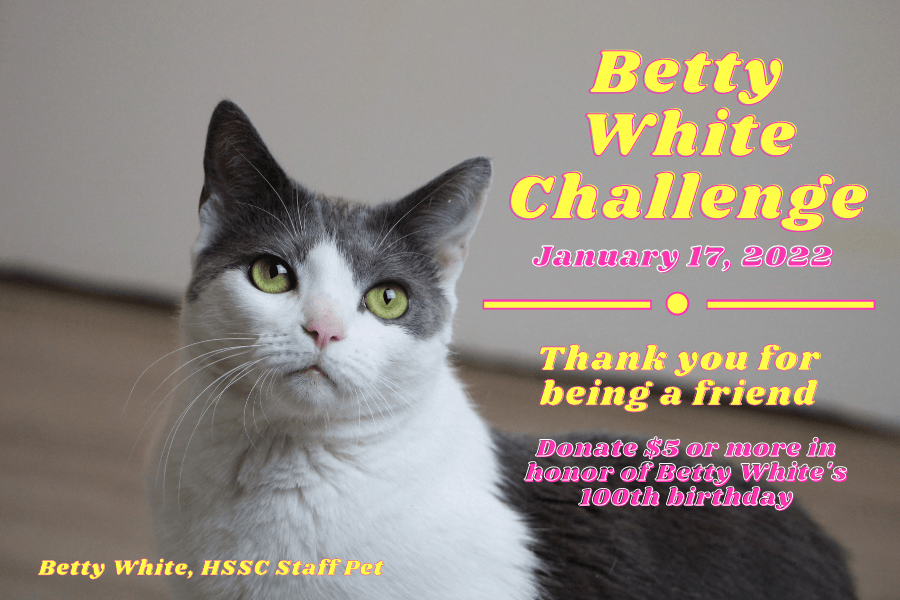 HSSC was featured on Good Morning America for the #BettyWhiteChallenge!

January 17 is a day that will live large in our memory. Not only did HSSC receive an astounding $63,000 in donations that day, but we were honored to be featured alongside four other elite shelters in a live segment on Good Morning America. It was an amazing day for animal shelters everywhere, and we think Betty would be proud to know her life and her love for animals inspired so many people. Of the $63,000 raised, $20,000 came directly from the GMA appearance. Anna Gonce, HSSC Executive Director, and Autumn Steiner, HSSC Senior Director of Philanthropy, were surprised on-air with the donation, which was provided by Mars, Incorporated and the Pedigree Foundation.

After Betty White's passing, just short of her 100th birthday, her fans across the country made the decision to honor her legacy by creating the "Betty White Challenge" to pay tribute to a cause she held dear to her heart throughout her life— animals. On January 17, people participated in a nationwide movement to celebrate Betty's birthday by donating to a local animal organization.

Our animals would like to say on Betty's behalf, "Thank you for being a friend".

By accepting you will be accessing a service provided by a third-party external to https://hssc.org/

Direct Link
Subscribe
THE HUMANE SOCIETY OF SARASOTA COUNTY
2331 15th Street | Sarasota, FL 34237 | 941.955.4131 | This email address is being protected from spambots. You need JavaScript enabled to view it.
Get Directions

THE HUMANE SOCIETY OF SARASOTA COUNTY, INC., IS A PRIVATE, NON-PROFIT 501(C)(3) CORPORATION REGISTERED WITH THE FLORIDA DEPARTMENT OF AGRICULTURE & CONSUMER SERVICES, REGISTRATION NUMBER CH239, AND RECEIVES 100% OF ALL DONATED FUNDS. A COPY OF THE OFFICIAL REGISTRATION AND FINANCIAL INFORMATION MAY BE OBTAINED FROM THE DIVISION OF CONSUMER SERVICES BY CALLING TOLL-FREE 1-800-435-7352 WITHIN THE STATE OR ONLINE AT WWW.FRESHFROMFLORIDA.COM. REGISTRATION DOES NOT IMPLY ENDORSEMENT, APPROVAL, OR RECOMMENDATION BY THE STATE.